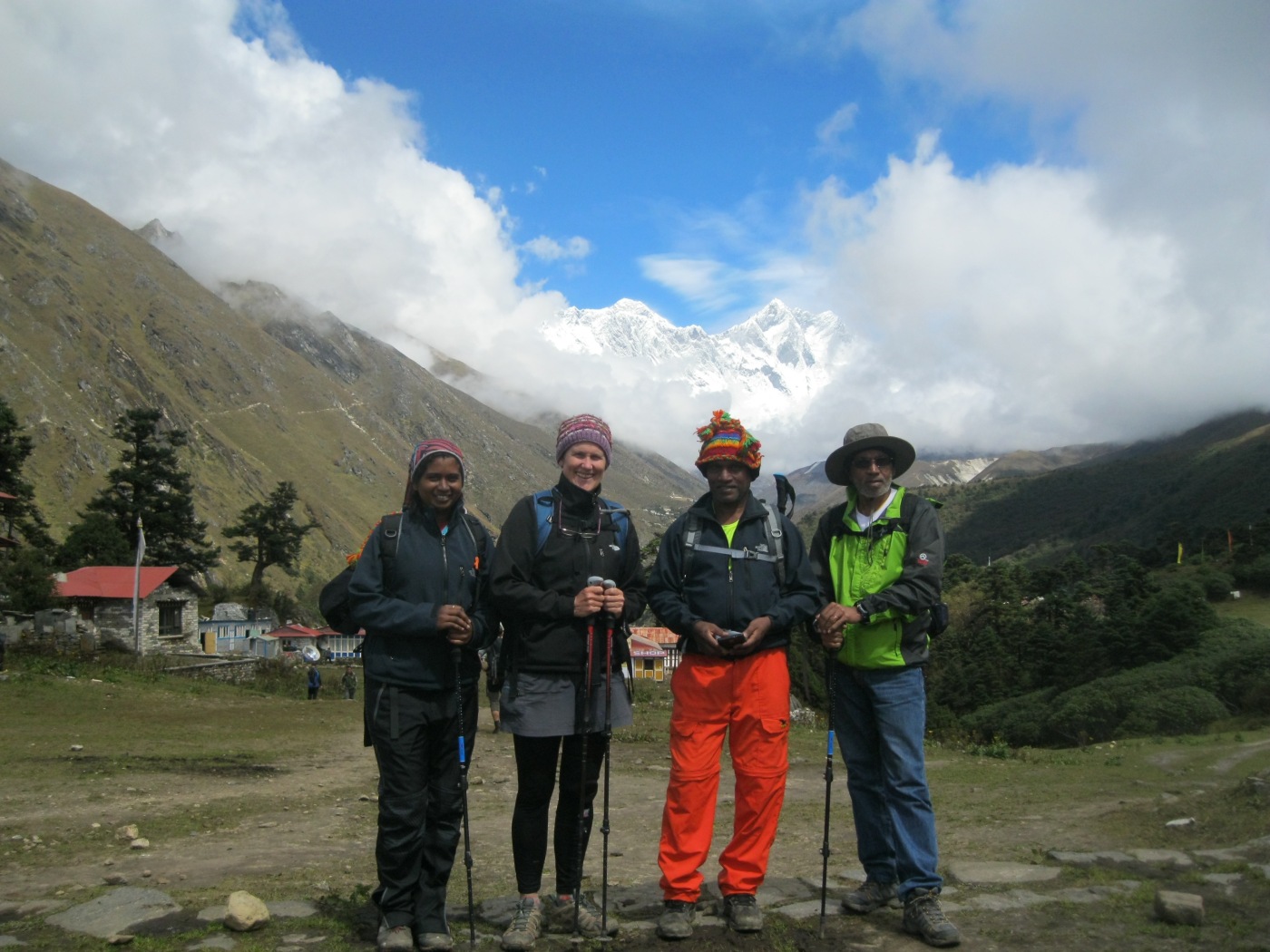 Being an expatriate is my normal.

I have a feeling that I have always been one, even in my own country. It is my normal to feel like a foreigner. Being an American in Asia or Mexico makes my foreignness more obvious, because of the language and the color of my skin. Living in New England makes it easy to hide the foreigner in me.

How small is America?

Living and traveling in Southeast Asia, makes me realize how small America is. While you, we, are grappling with the election of our new president (He Who Shall Not Be Named), he is a passing fancy here. Here in Malaysia, America is no big deal. When locals ask me where I live, I usually say on the New York side or the opposite side from California. Sometimes, I just say I live near Canada. Most of the time people just cannot imagine where that might be.

I’ll admit that as an American I always felt privileged, maybe a step above the rest of the world. Living among expatriates in Kuala Lumpur has made me realize that I am not. Nor am I the center of the universe, which may seem obvious to you, but it took me a while to realize that.

Still, I find myself missing my country. The regularity of starting my car on a cold winter day. Wondering whether I will make it out of the driveway if I get enough traction as I charge our of the garage full bore. I miss going to Twelve Pine for a latte. I miss crashing around the woods with Beth. I miss lunch at Plowshare Farm. I miss clipping on my cross country skis and skiing out of my basement door in a raging snowstorm.

Do I want to come back?

I miss the normalcy of my New England life. The question is can I sustain the personal and emotional growth that I have gained in the past two and a half years, or would I slither back into my old skin again.

Do I want to come back?

Yes. I want to come back and live in a room with a kitchen, a bed, and a bathroom. I want to live in the woods, off the grid and write.

Can I come back?

I certainly have taken risks before. I am capable of doing anything. But I’ll need a car. I’ll need to pay first and last month’s rent. Oh and I’ll need a job. Isn’t it funny how leaving the country was so easy, so dynamic, unpredictable and challenging, but grappling with a possible return stops me dead in my tracks? All of my protectors leap out at me and yell be careful, it’s not the way you think it is, you will fall into a rut again, you can’t teach, you can’t earn a living writing, you will end up right where you started two and a half years ago. But I can keep them at bay. I have taken to propping those voices on my shoulder and telling them to settle down and watch me take care of myself.

I finally get it when Tiresias gives Odysseus the oar and tells him that after he returns to Ithaka he will have to go somewhere far away and plant the oar in a place where no one has ever seen one before. It’s because Odysseus is not that person anymore. He made it back to Ithaka a different man, and Ithaka was not the same either. Plant the oar, plant your old self somewhere far away and your return will be complete.

So I can go back. I can take my oar with me. And after I have settled into my life there, I can pick up my oar and take it to say, Louisiana or Kansas, and plant it there. Because home is in my heart. I know that it is not in Peterborough, Katonah, or Kuala Lumpur.

It sounds so simple.

Why is it so hard? 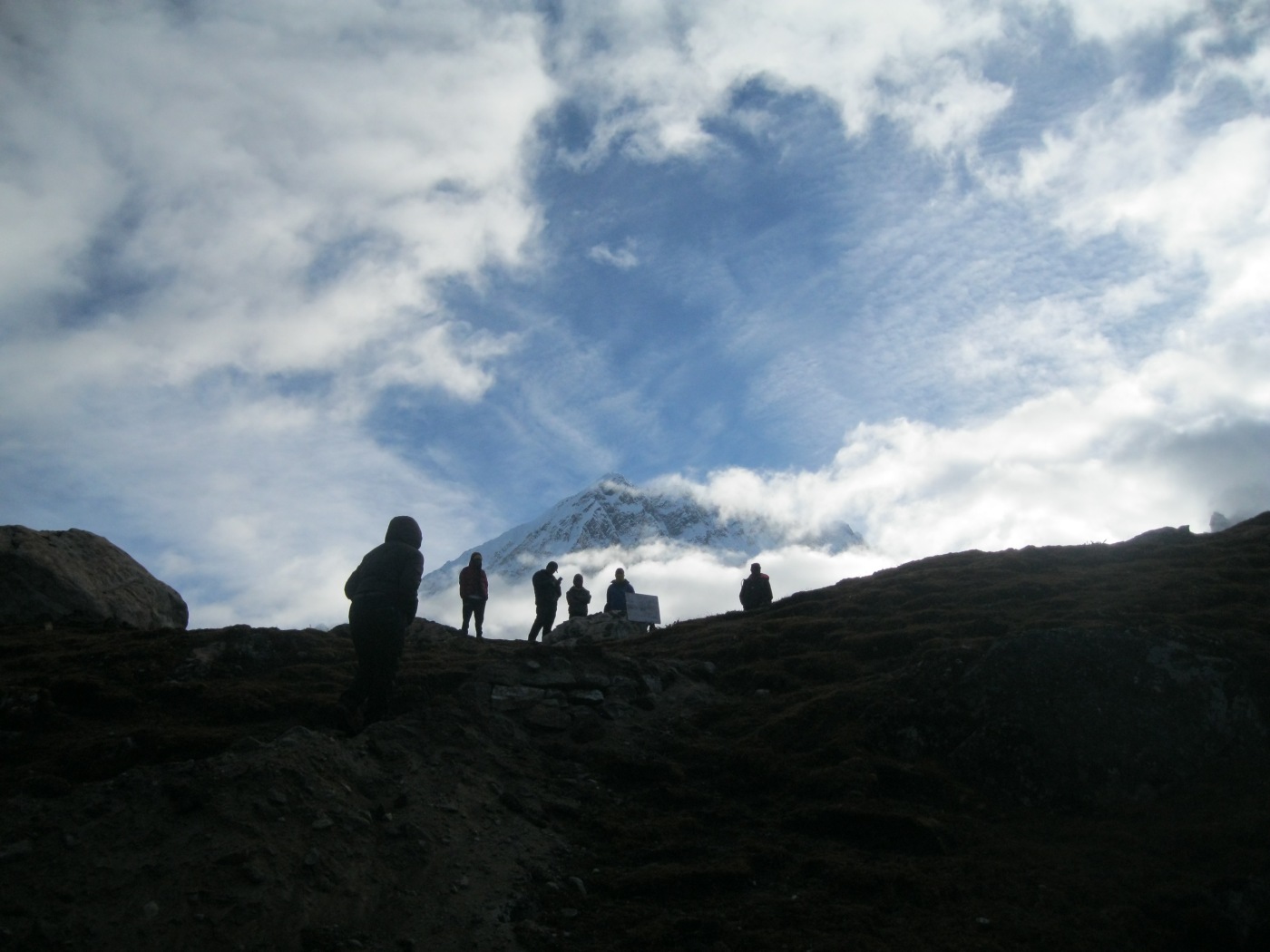 Last Day of the Everest Base Camp Trail Trek

I lost my group. As we left the double suspension bridge,

we took a different path simply because it went down. The idea of going up was not something any of us was willing to do if we had a choice. Peri had gone ahead at his steadfast pace. Ganesan and I were staying with Danya who was sick with fever, vomiting, and delirium. I went ahead to relieve myself after a yak team passed by us, and that was the last I saw of my group for most of that day.

The trail was empty, which is unheard of, especially this far down when the faint-of-heart have not yet given up. I ran into one more yak team and their driver, which did not surprise me because I was walking in a mire of Yak shit. I ran into an Australian coming from Lukla, so I knew I would eventually end up in the right place. 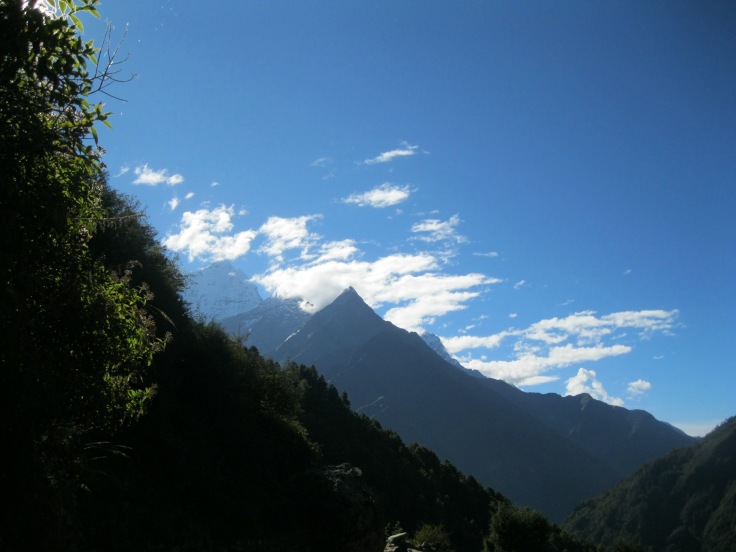 The trail was beautiful and woodsy, interrupted by waterfalls flowing through it. At the next suspension bridge, I looked down at the way I should have come–a bright, flat trail that ran along the river. This was not the first time that I had opted for the more challenging path in my life. Perry was not there, so I assumed I must have fallen quite far behind because of my detour, which seemed much longer than the pleasant river stroll, which I could have opted for. I waited at the bridge for about 20 minutes to confirm my conclusion.

I happened upon a town five minutes from the bridge and peered into every tea house and café along the way to find my compadres. Then I stopped to take some tea on a wall outside of a little hovel where a woman and her daughter said they would deliver some tea. It was so warm and sunny there that I forgot to think of the yaks.

Yaks have the right of way—always. When a team of them approached me while I sat on the wall drinking milk tea, I dodged into the doorway so as not to be pushed off of my perch. The head yak stopped to take a lick out of the sugar bowl next to my tea. I threw an almond at it to get it to move on with little effect. With a whistle from his master, the yak moved on without getting a sweet taste of my tea.

I still had a residual fear that my group would be angry with me for dashing ahead if I was ahead, so I started telling people if they saw an Indian man and a woman in green coats walking along, they should tell them the American was ahead of them.

The more I thought about it, I realized that there was no way that Danya could have gotten that far ahead of me in her condition, so I took a pit stop, ordered some potatoes and two cups of tea and waited. I noted where I was: Solukhumba – Riverview Lodge. And waited. And waited for two hours before I saw Perry’s green jacket and Ganesan’s orange pants bobbing down the trail. 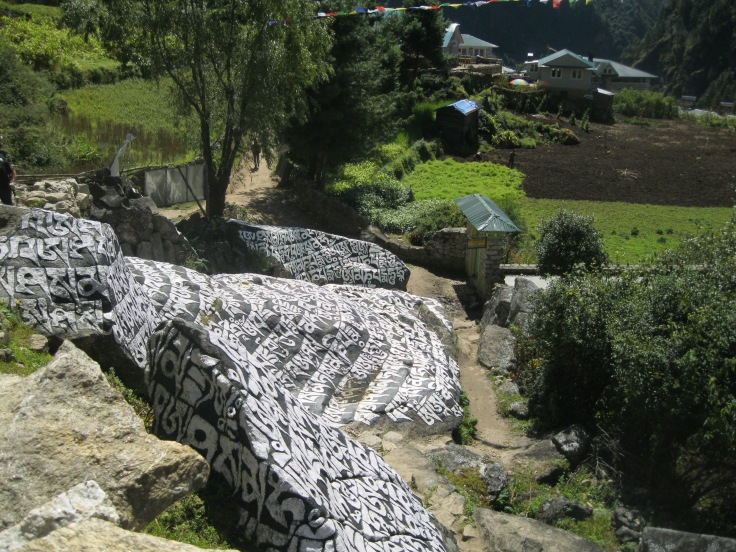 We put Danya on a horse to Lukla and continued well behind her on foot.

Bouncing from Namche Bazar to Lukla

It felt good to breathe more easily with each meter that I descended. I danced across suspension bridges without trepidation, managed to piss without hitting my shoes or socks, made way for yaks and porters. I experienced my journey in reverse.

My favorite parts of the trek were below the tree line in the Rhododendron Forest where I could peek through the trees and the clouds to see Everest once on the way up and once on the way down.

On the way down, the sky was the most brilliant and clear it had been on the entire trip. When we got to Tengboche, the sky blew open and free of clouds. I could see the monastery where we had attended a prayer and tea drinking ceremony in a thick fog on our way up. I could see the bakery where we had eaten some of the best apple pie that I have ever tasted. AND I could see Everest in all of its majesty. Everest is almighty because it is Everest, but I found its sister and brother mountains to be just as spectacular. The unpredictable cloud cover made the mountains grander because I never knew if, or when, they would reveal themselves. When they did, they were awe-inspiring.

Tengboche on the way up

Tengboche on the way down

While I danced down the mountain as people trudged up, I understood the lightness I had seen in people coming down as I had trudged toward base camp. Now I weaved among the yaks knowingly. I plunged through their dung and felt charged by my ever-increasing supply of oxygen.

Have I changed? Of course. Would I ever do it again? NEVER—well, probably never. 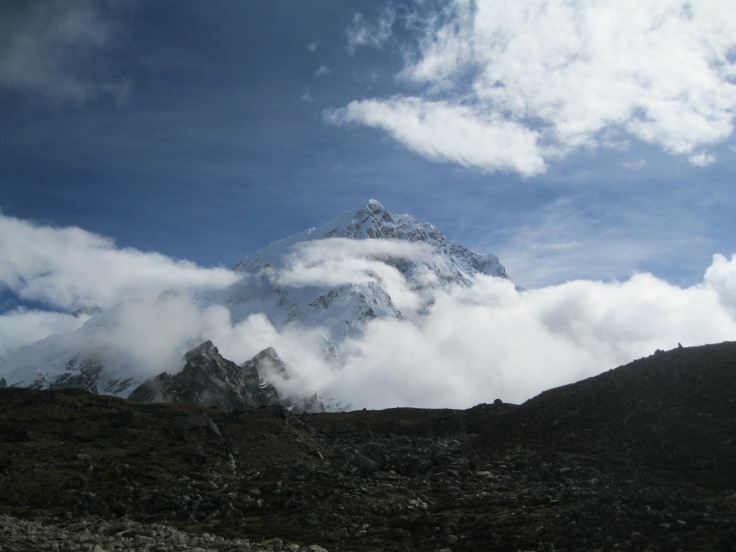 The third world continues to overwhelm me, but it is easier to digest in the mountains where beautiful people move in sync with the earth using every resource they can find — the river to wash their clothes, grass to cover the fertile soil, yak dung for warmth, tourists for profit. 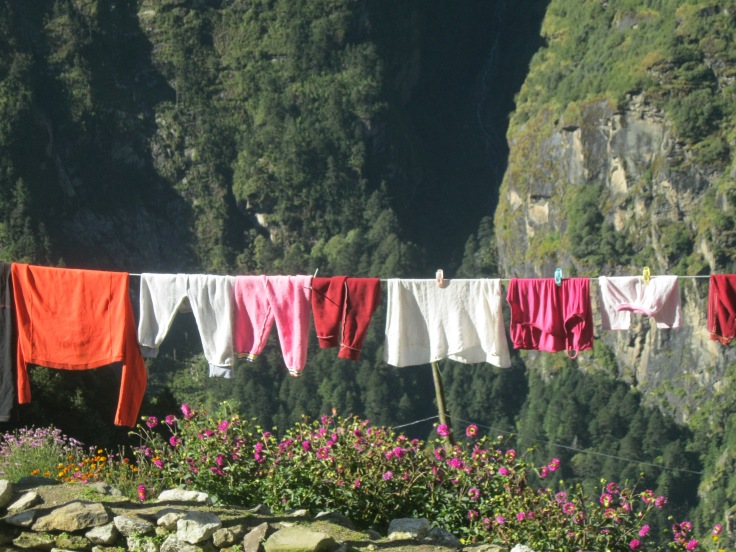 Men work as porters bearing burdens exceeding their body weight. Women run tea houses. They also take the time to plant colorful gardens with marigolds and bright red flowers that peer over the stone walls that line the trail. The poverty is clean and quiet, unseemly and home grown. It is a subsistence lifestyle.

In Kathmandu, women and children buzz recklessly in dusty clouds on motorbikes, tooting their horns at nothing, cows amble through the city not knowing which trash heap to lick. At the temple beggars with amputated everything lie twitching in the sun, and I wonder who placed them there so strategically. The beauty of a temple turns into a scam. I didn’t notice any prayer flags flapping in Kathmandu. Is there nothing to pray for in this wretched contrast to where I have been? 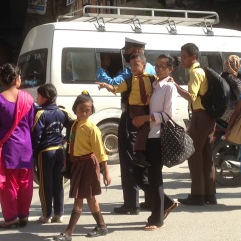 I wonder what the great Buddha thinks. The same Buddha whose eyes scan the peaks of the Himalayas from pale stone shrines along the Everest Base Camp trail watching people from all over the world make their pilgrimage to the great mother mountain.