(Check out the slide show at the end)

As the world continues to destroy itself, I had the honor and privilege to see a living coral reef. One thing that my walkabout has taught me is that this planet is going down fast. To find pieces of beauty in nature is a rare and special thing. How many more times will I get to see a living thriving coral reef like this one? This was the first place that I have been in Malaysia that was clean. Clean water and no trash – well… I have lower standards than I used to; there was still some plastic hidden here and there, but nothing as blatant as I have experienced in most of Malaysia. 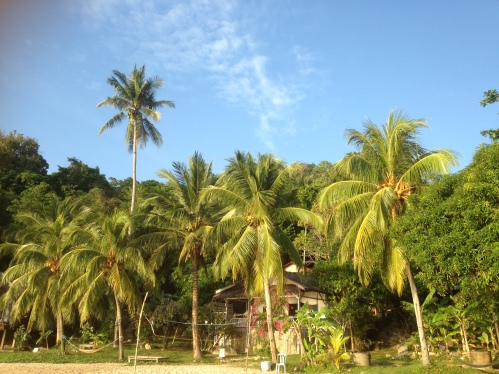 Airplanes, vans and boats to paradise

After spending way too much time in the airport because my father trained me to arrive endless hours before a flight, I shared a cab, which turned out to be a van, with some Australians and headed out for Kota Bahru, where a speed boat would take me to one of the Perhentian Islands. There is a reason why they call them speed boats. We flew over the ocean’s swells for a half an hour and I was the first drop off on Petani Beach. As I stretched from the speed boat to the water taxi that would shuttle me to shore, the Caribbean blue water dazzled me.

The professor and Mary Ann…

I felt like I had arrived on Gilligan’s Island, in color. Ramshackle bungalows lined Petani Beach, Internet was not existent, water was scarce, and beauty abundant. I settled in for dinner with a cluster of tourists like me who had looked for and found the most remote spot on the island. We sat at a hanging table and compared life experiences from Turkey, Italy, the Netherlands, and Malaysia. Most of us were wanderers, not sure where we would end up in a year, which has become my normal. I love it when people don’t react to me traveling alone to remote places. Most of these people are young enough to be my children. I rarely run into women my age traveling alone, which means I am either incredibly adventurous, or irresponsible, or both.

My three days on the island were spent meeting people who drifted in and out, snorkeling, hiking around the island, and snorkeling some more.

Neon is the new black

I used to think that neon was an artificial color – it is not. The ocean lit up with fluorescent fish that batted against my goggles. Clown fish brushed inside of sea anemone, fish brushed against other fish to suck off whatever nutrients attached to their scales. The baby sharks swooshed about harmlessly, and the barracuda were practically translucent. One day, I met up with Napoleon fish that had huge blue bodies and buck teeth. When I snorkeled toward the shore it was easy to see the stingrays. One thing mystified me. At first, I thought I was seeing bright blue and black snake squiggles. As I swam further, I realized that they were clam lips, which if I looked closely, were opening ever so slightly.

Every other place that I visited on the island, except for one, was a tourist trap –music, Coca-Cola, lots of booze, bikinis and music. At Petani Beach, we learned that we did not need to go anywhere. We had found paradise.